Atman  – in order to understand the Hindu world-view it is essential to grasp this first and foundational concept. Atman refers to the non-material self, which never changes. It is distinct from both the mind and the body. This real self is beyond the temporary designations we normally ascribe to ourselves, in terms of race, gender, species and nationality. Consciousness, wherever it is found (in other words not only human beings), is considered a symptom of the soul, and without it the body has no awareness. In short the atman or individual soul is spirit (Brahman), unchanging, eternal and conscious while the body is material, temporary and unconscious. At death the soul is carried within the subtle (astral) body into another body. The next body is determined by the state of mind at death, and by the soul’s desires and deserts.

Samsara – or cycle of reincarnation refers to the process of passing from one body to another throughout all species of life. Hindus believe that consciousness is present in all life forms, even fish and plants. However, though the soul is present in all species, its potential is exhibited to different degrees. In aquatics and plants it is most “covered”, practically asleep, whereas in humans it is most alert. This progression of consciousness is manifest throughout 6 broad “classes of life”, namely 1) aquatics, 2) plants, 3) insects and reptiles, 4) birds, 5) animals and 6) humans. Most Hindus consider samsara essentially painful, a cycle of 4 recurring problems: birth, disease, old-age and death.

Karma – The universal law of karma (action and reaction) determines each soul’s unique destiny. The self-determination and accountability of the individual soul rests on its capacity for free choice. This is exercised only in the human form. Whilst in lower species, the atman takes no moral decisions but is instead bound by instinct. Therefore, although all species of life are subject to the reactions of past activities, such karma is generated only while in the human form. Human life alone is a life of responsibility. The Bhagavd Gita categorizes karma, listing 3 kinds of human actions: 1) Karma; those which elevate, 2) Vikarma: those which degrade and 3) Akarma: those which create neither good nor bad reactions and thus lead to liberation.

Prakriti – or matter is inert, temporary and unconscious. Everything made of matter undergoes 3 stages of existence- 1) it is created, 2) it remains for some time and, 3) it is inevitably destroyed. 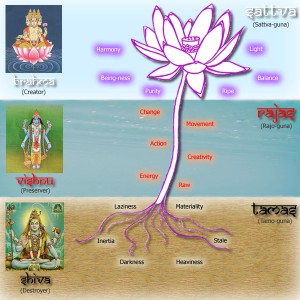 Gunas – Matter is composed of 3 qualities (gunas) corresponding to creation, sustenance and destruction:

All material phenomena can be analyzed in terms of the gunas. According to the soul’s preference for a particular mode, it takes on a corresponding body. Those influenced by goodness will be elevated to the heavenly planets at death, those largely in influenced by passion stay in the human society and those influenced by ignorance enter into the lower species.

Maya – or illusion means that which is not. Influenced by the 3 gunas the atman or soul mistakenly identifies with the body. He accepts such thoughts such as “I am white and I am a man”, or “This is my house, my country and my religion.” Thus the bewildered soul identifies with the temporary body and everything connected to it, such as race, gender, family, nation, bank balance and sectarian religion. Under this false identity the atman aspires to control and enjoy matter. It is by cultivating the quality of goodness that the soul can make gradual progress towards transcendence and eventually fully escape the influence of any of the 3 gunas including goodness and obtain liberation.

Moksha – or liberation from Samsara, Maya and the influence of the 3 Gunas is considered by most Hindu traditions as the ultimate goal of life. The main difference of opinion centre on the precise nature of Moksha. Although practically all schools consider it a state of unity with God, the nature of such unity is contested. The Advaita or monistic traditions say that moksha entails annihilation of the soul’s false sense of individuality and realization of its complete non-difference from God. The Dvaita or dualistic traditions claim that God remains ever

God is addressed by many names in Hinduism depending on the tradition or aspect of the Supreme Truth that one is trying to present. Many Hindus describe God as Sat-Cid-Ananda or full of eternity, knowledge and bliss.