Classifying the many groups within Hinduism is a challenge more so than with other religions. In so doing, we may unconsciously promote the idea that Hinduism is a single monolithic religion. As mentioned before it is more accurately a “family of religions” with each family member autonomous but sharing distinctive family features. The fact that some Hindu traditions are monotheistic others monistic and yet others polytheistic is a proof that Hinduism is quite different from other world faiths. In trying to discern specific strands within Hinduism we are in danger of over-generalizing, promoting stereotypes and creating false boundaries. Nonetheless, it is useful- even necessary-to establish a somewhat tentative framework for categorizing the numerous groups and sub-groups. The main classification of Hinduism is based on the focus of worship which produces four main traditions:

There is a fourth mainstream Hindu tradition called Smarta. The followers of this tradition are called the Smartas and are traditional and very strict about rules and regulations and emphasize the universality of Hinduism by distancing themselves from the exclusive worshippers of Vishnu, Shiva or Devi. The Smarta Tradition is a relatively new development in Hinduism and many Hindus may not strictly identify themselves as Smartas but, by adhering to Advaita Vedanta ( the doctrine of Monism or Oneness with the Supreme) as a foundation for non-sectarianism, are indirect followers. The main theologian of this tradition is Shankaracharya or Adi Shankara who is reputed to have started the system of worshipping 5 deities. He was the founder of the Advaita School of Vedanta which underpins the widespread notion that all deities are equal. The main scriptures for the Smartas are: Vedanta Sutra, Upanishads and Shariraka Bhasya. And the main places of pilgrimage are: Badrinatha, Puri, Kanchipuram, etc.

Another criterion for classifying the followers of Hinduism is the spiritual processes or paths they choose. Though within Hinduism there are many diverse practices most fall within 4 main paths or margs. Since these paths are aimed at union (with God) they are also called “yogas”. They are: 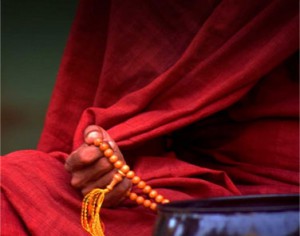 There are other criteria for classifying the different traditions within Hinduism like; the six orthodox doctrines or darshanas (Vaisheshika, Nyaya, Sankhya, Yoga, Mimamsa and Vedanta), the Advaita or monistic/impersonal traditions and the Dvaita or dualist/personal traditions (with many variants). For the Advaita traditions God is impersonal and the soul is entirely non-different from God (but has yet to realize/develop his Godhood) while for the Dvaita traditions God is ultimately personal and the soul remains eternally distinct from God (though both are usually considered Brahman).To attempt to describe these other criteria properly would be impossible in this brief presentation on Hinduism.

Though most Hindus belong to one of the above mentioned traditions or practice one of the above mentioned paths there are many Hindus that don’t identify with any particular tradition or path but several or all traditions and paths simultaneously. There are also many that follow one or several of the many modern Hindu movements many of which are syncretic, adopting concepts and practices from any of the above traditions or paths or even from other world religions and philosophies. Hinduism tends to accommodate people with different concepts of the Supreme so that all can gradually progress towards ultimate self-and God-realization.