Meeting with Minister of Justice, Mr. Koen Geens: Request for recognition of Hinduism

Subject of the meeting: Request for recognition of Hinduism

The meeting started at 17:45 with Mr Bernard Dufour, assistant to the minister, and since the Minister was in the parliament. He explained the process for getting subsidies from Ministry of Justice to support the Hindus in Belgium to set up a secretariat, anticipating a future recognition of Hinduism. After the draft is accepted by the Minister, he will then present the new proposed law to the Belgian Parliament in the fall of this year. If accepted, the subsidy for the secretariat will then be given by March 2018. Mister Dufour informed us that from HFB side we have been very diligent by filling in all the documents and by giving all the required information. This was later confirmed by Minister Geens. He suggested to us to continue to continue meeting different political parties in the autumn. Mr Dufour mentions that the HFB should become more professional and therefore they are intending to grant us the requested subsidy. 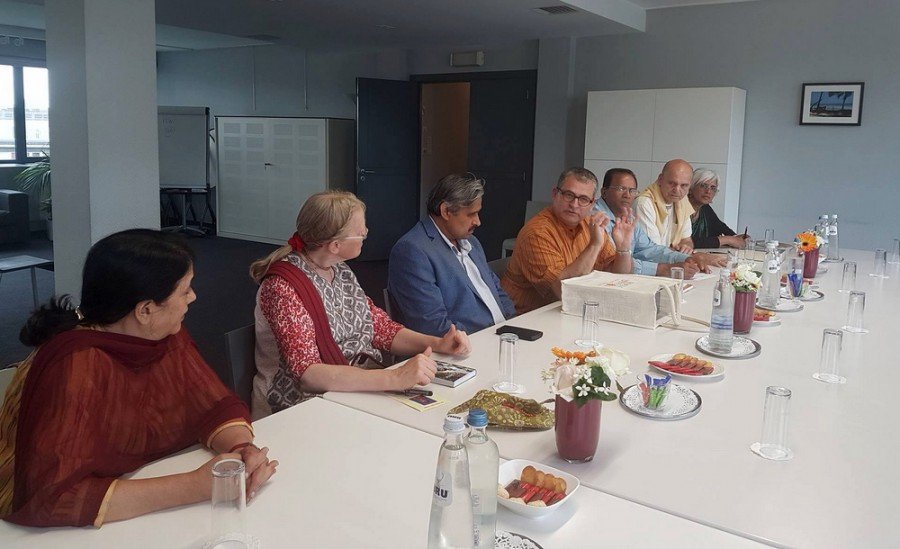 There was a brief introduction by each member of the HFB member to the minister who listened attentively. He has visited India and he said Belgium sees Hindus as peace-loving citizens. He himself is especially impressed by the character of Mahatma Gandhi. The minister explained that the approval of the Belgian parliament, to give financial support to establish a secretariat, is a very important step in the whole process. Things take time due to research and to see how to fit Hinduism in the Belgian society.

He personally understands and principally agrees that Hinduism should be accepted as a bonafide religion in Belgium and he recognises the need for education, pastoral care for hospitals, prisons etc.

At the end of the meeting Mahaprabhu asked advice on the possibility for the Hindu Jain and Sikh Communities to have an audience with the King and Queen, especially in the light of their upcoming visit to India, the minister agreed to assist in arranging such a meeting.

The minister also mentioned that it would be appreciated by the Belgian Government if all Hindus, including Jains and Sikhs would be present under the umbrella of Hinduism. The minister made it very clear that the Parliament will not give separate recognition to the Jains and/or Sikhs.A final request, to write a letter of support for the Janmashtami Festival, was well received by the minister.