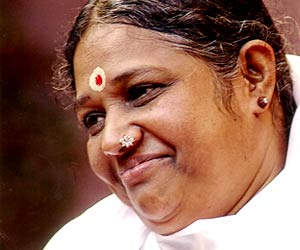 The Mata Amritanandamayi Math is a network of centers around the world devoted to the teachings of Mataji (b. 1951) which emerged in India in the 1960’s. In the Temples devotees practice a form of Bhakti Yoga by singing Mataji’s bhajans/songs. Devotion to a wide variety of deity figures including, Jesus, Buddha, the Virgin Mary and so on is allowed and even encouraged, as Mataji believes that all religions are spiritual paths that lead to the same One God.